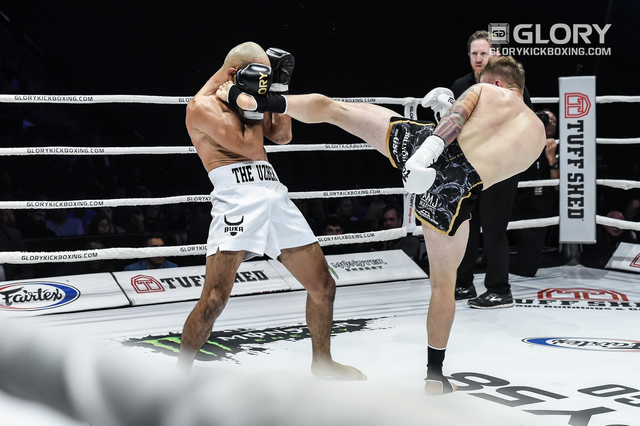 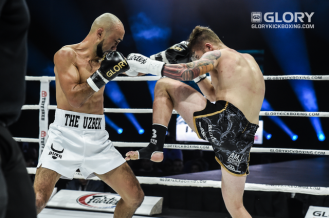 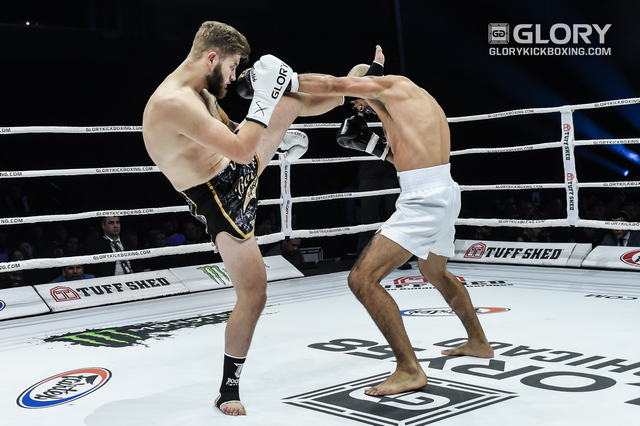 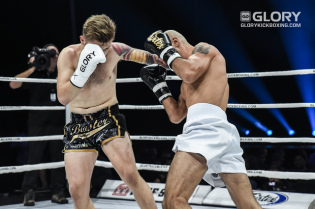 Newark’s Bailey ‘BadBoy’ Sugden was back in the USA for the third time in just 14 months last week, flying the flag for UK kickboxing on the Main Card of GLORY 58 Chicago.

The Suggy’s Gym professional made his fifth appearance for the world’s leading kickboxing promotion on Friday 14 September in what was an explosive Featherweight contest against Anvar Boynazarov from Uzbekistan.

Despite being narrowly defeated by an older, more experienced opponent, Bailey was quick to declare the hope that his performance in Chicago would see him moving up the GLORY rankings.

“I really enjoyed going toe to toe with someone who has so many knockouts on his record,” he said. “Anvar’s stopped some of the best fighters out there, with 54 of his wins ending in KOs, but I know I put up a great fight.

“I hope my performance tonight puts me in the GLORY top ten; having already beaten Chenglong Zhang, who is currently ranked Number 10, it’s where I belong.”

Fighting first on Friday night’s main card, the young Newarker came out throwing with volume, following the power-punching Anvar around the ring and changing the levels with his own punches.

When a flying knee from Anvar hit him flush on the chin, Bailey stood firm, much to the surprise of his opponent who knocked out Muay Thai legend Fabio Pinca earlier this year. Recovering and looking unfazed, BadBoy went back to firing combinations which ended in a closely-contested opening round.

Sitting back and looking to counter his opponent’s forward advance, Anvar caught a kick from the British fighter, which brought a warning from the referee. As the round progressed, a spinning back kick from the Uzbek just missed the mark and a pair of left head kicks was blocked by the high guard of Bailey, who countered a wayward flying knee with a series of punches.

A firefight in the centre of the ring followed, with both fighters wobbling each other before the second round was brought to an end by the bell.

With one round apiece on the score cards, the final three minutes opened with a much more aggressive Anvar. After walking down Bailey and delivering a jumping knee along the ropes, the Uzbek cracked him in the ribs with a pair of kicks but once again the Suggy’s Gym fighter was unfazed. The two men traded short knees in the clinch and swung wildly to the final bell.

“I really thought we were heading into an extra round after the third bell but for Bailey to come so close to getting his hand raised against an opponent of Anvar’s standard at only 20 is incredible,” said Suggy’s Gym head coach Dean Sugden.

“Bailey’s learning in the fast lane – GLORY is the premier division in striking and it just shows how highly the powers that be think of him when they’re putting him in the ring with great opponents such as Anvar and Zachary Zouggary.

“He has both the potential and the time to achieve his goal of becoming a GLORY champion and can only improve physically, technically and mentally, which has to be a very scary proposition for his next opponent.”