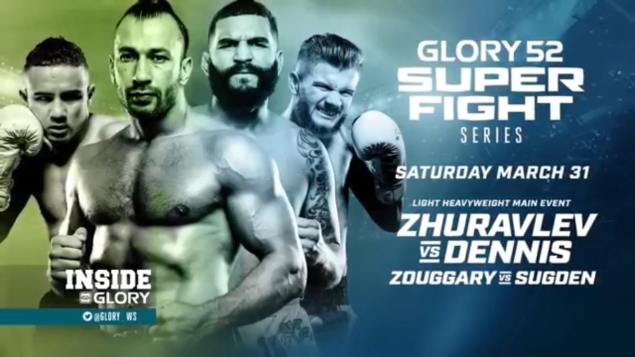 After taking the kickboxing world by storm in both New York and Rotterdam last year, Nottinghamshire’s Bailey ‘BadBoy’ Sugden is preparing for the next big step in his professional career with the sport’s leading promoter.

The Suggy’s Gym 20-year old, who currently stands at number 11 in the GLORY featherweight rankings, will be heading back to the USA for his first outing of 2018, when he goes up against Zakaria ‘Double Z’ Zouggary on the card of the SuperFight Series of GLORY 52 Los Angeles on Saturday 31 March.

Going into the fight at number eight in the GLORY rankings, with two wins and one loss on his record, the Dutch-Moroccan 23-year old from Team Souwer in Holland is known for the unpredictability that is central to his style.

But with two decisive victories to his name since his GLORY debut in July 2017, the Newark fighter who was described as the British Bulldog after his Rotterdam win is confident that the trip to California will take him closer to his goal of becoming a champion on the world’s biggest kickboxing promotion.

“Apparently he can pull out all kinds of techniques and he says you never know what to expect of him at any given moment,” said Bailey of his opponent. “Well, that goes double for me – whatever he tries to throw at me, I’m more than ready for it. Nothing and no one will be getting in my way; Double Z is just another stepping stone on my road to the title and I will step right over him.”

Suggy’s Gym head coach Dean Sugden added: “We are delighted to be working with GLORY, the leading kickboxing promotion by far. As a club, we’ve had a 100 per cent success rate with four wins out of four, starting with victories for Chad over Atakan Arslan in Dubai in April 2015 and then against Murthel Groenhart in Las Vegas in August of the same year. Now Bailey is smashing it – first there was an emphatic win against Artur Sorsor at Madison Square Garden, then he dominated Newcomer of the Year and number ten ranked Chenglong Zhang in front of a 15,000-strong crowd in Rotterdam.

“A lot of quality UK fighters have been given a chance on GLORY but no one has performed as well as Suggy’s Gym. We have a winning formula, #BBB is only getting stronger and better so Double Z is in for the fight of his life. They’re both exciting and unpredictable – put this one anywhere and it would be the fight of the night. And I wouldn’t be at all surprised to see these two rising stars meet again in a battle for the Featherweight title.”

GLORY 52 Los Angeles will be broadcast on ESPN and the full event, including the SuperFight Series card with Bailey’s fight, will be streamed live worldwide via UFC Fight Pass. Details and links will be published here and on Facebook nearer the date.